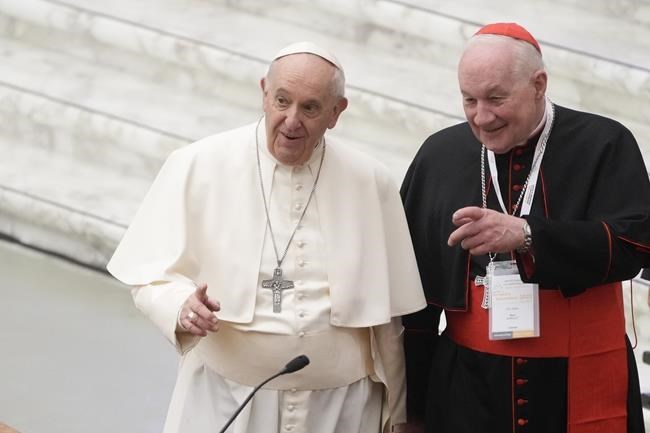 After a complaint of abuse against a cardinal of Quebec, 3 other women file a complaint against the church

MONTREAL — After Quebec cardinal Marc Ouellet was accused by a woman of sexual assault in a class action lawsuit filed this week, more women have come forward with similar allegations against members of the province’s Catholic Church. .

MONTREAL — After Quebec cardinal Marc Ouellet was accused by a woman of sexual assault in a class action lawsuit filed this week, more women have come forward with similar allegations against members of the province’s Catholic Church. .

At least three women have filed formal sexual assault complaints against the Archdiocese of Montreal since the allegations against Ouellet became public, Christine Kirouack, the city’s archdiocesan ombudsman, said in an interview Wednesday.

“It’s exploded since yesterday,” Kirouack said of the Superior Court filing of two class action lawsuits against members of the Catholic Church in Quebec, involving hundreds of alleged victims.

It was, however, media reports of the allegations against the cardinal that led to many calls from women in Kirouack. She said the high-profile allegations by a grown woman broke the stereotype commonly associated with church abuse – that it involves young children, mostly boys.

“One of them told me when she saw some media reports… she recognized herself in it and wanted to report it,” Kirouack said.

“It’s encouraging to see that it can open doors for others. We show that it’s serious.”

On Tuesday, the Montreal law firm Arsenault Dufresne Wee Avocats filed two introductory requests for class action. Both lawsuits had recently been authorized by a Quebec judge, and one of them included the testimony of a woman identified as “F.”

She accused the cardinal, once seen as a frontrunner to become pope, of several incidents of sexual assault between 2008 and 2010, including slipping his hand on his back and touching his buttocks at an event in Quebec City. At the time, the cardinal was Archbishop of Quebec while F., who was 23, was working as a pastoral intern at the Archdiocese of Quebec.

In the first trial, in which Ouellet is named, 101 alleged victims accused about 88 priests or diocesan staff of sexual assault. About 19 women are among the alleged victims, Wee said in an interview on Wednesday.

“We tend to associate church abuse with children, but it happens to adults too,” Wee said. “Recommendations have been issued…and we need to put in place as much support for children as for adult victims.”

Solange Lefebvre, a professor of religious studies at the University of Montreal, said the fact that Ouellet’s alleged victim was an adult could open the door to more adults filing allegations against the Church.

“Whether Ouellet is found guilty or not, it allows us to address more broadly the power in the Catholic Church as it can be exercised over adults,” Lefebvre said in an interview Wednesday.

Lefebvre said that while child sexual abuse within the Catholic Church is well documented, the allegations against Ouellet could also create opportunities for prosecutors and police to search for potential victims among young women involved in the crime. ‘church.

“All of our focus, and for very good reasons, was on child abuse,” Lefebvre said.

“But here the (alleged) victim is an adult and that gives a new dimension to the allegations… Until now, investigations into allegations of abuse against the Catholic Church have all involved young children.”

This report from The Canadian Press was first published on August 17, 2022.

This story was produced with the financial assistance of Meta and the Canadian Press News Fellowship.