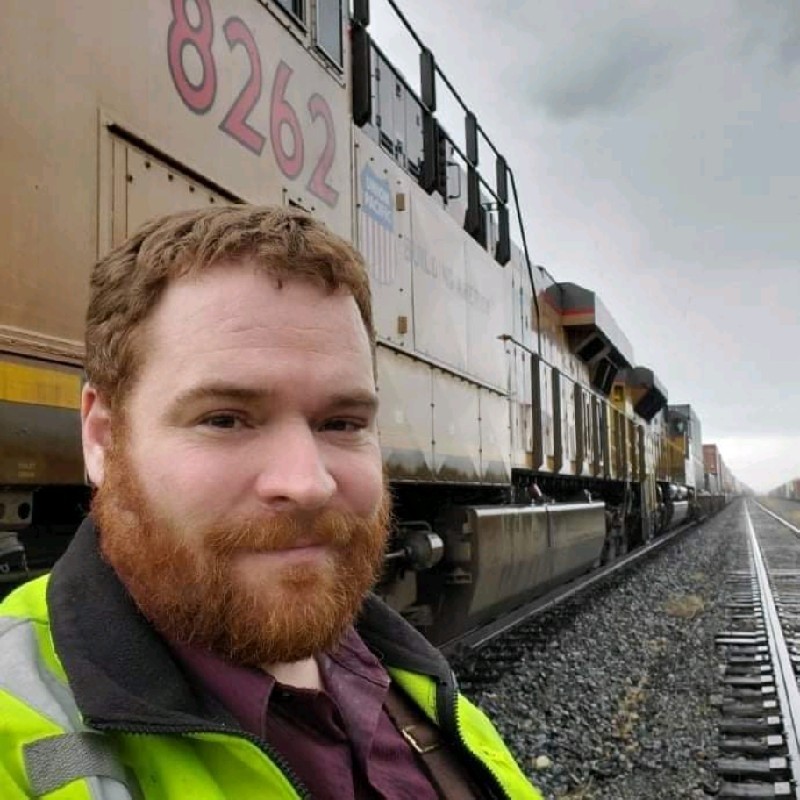 WASHINGTON — When Michael Lindsey II, veteran Union Pacific locomotive engineer, looks at the industry he loves, he doesn’t like what he sees.

So he became outspoken on issues ranging from crew shortages and ongoing service issues to employment contracts and railroad regulations. He wrote two letters to the Surface Transportation Board this year. And Lindsey’s encouragement of other rail workers to join him in speaking out prompted an unusual flurry of letters to the STB from grassroots operators.

“As for what motivated me to write to the STB, that’s been a long time coming,” says Lindsey, who is based in Pocatello, Idaho. In his 17 years with UP, he made many proposals to corporate headquarters that would improve operations and efficiency on his stretch of railroad between Green River, Wyo., and Nampa, Idaho.

“I care deeply about the industry and have done my best to help implement plans that would improve my industry. A few have been implemented,” he says, including detailed recommendations on passing routes and fuel conservation.

But the rail industry has changed in recent years.

“Several years ago, I began to notice a disturbing trend that the railroad was spending far more on stock buybacks than on actual capital improvements,” Lindsey says. “It became kind of a learning obsession as I learned more and more about the industry and its finances.”

All listed railways have intensified their share buyback programs in recent years. The railroads are far from alone in gobbling up their own stock: the majority of large corporations use this practice as a way to increase earnings per share.

Lindsey took her concerns straight to the top by calling CEO Lance Fritz and then-CFO Rob Knight on their cell phones. Lindsey says they took her calls and spoke for about 30 minutes.

“Then at a town hall meeting in Pocatello I called them out to the superintendent and the entire service unit on their stock buyback program. I accused them of burning through our working capital to get rich and weaken our railroad in the years to come,” Lindsey said of a meeting five or six years ago. “So far I’ve been right.”

Fritz defended UP’s stock buyback program. The money the railroad generates is used first to pay for expenses like salaries and fuel, and then to maintain and expand the network. After that, part of what remains is returned to the shareholders.

Meanwhile, changes to tax laws in 2017 meant train crews could no longer deduct the cost of meals purchased at their out-of-home terminals, which Lindsey says hurt crews’ wallets. “I started to sound the alarm bells with my colleagues, but of course it never really helped much,” he says. “But thanks to COVID, and [Precision Scheduled Railroading] and the destruction of our seniority and deteriorating working conditions, I became more and more compelled to start talking.

This prompted his first letter to the STB, an April missive explaining why he thought the railroads were struggling to retain and hire crews. This letter and the attention it received turned on a tap. Around the time of the STB’s rail service hearings in April, more than three dozen ballast-level employees wrote to the board.

Union leaders regularly comment on issues such as mergers, line splits and labor protection issues. But STB chairman Martin J. Oberman and former chairman Daniel Elliott II, who served on the board from 2009 to 2017, say they couldn’t remember ever hearing of rank-and-file workers before. .

The council even heard from the wives of some railway workers, including one who said her husband was disciplined after leaving work in the workplace when their baby girl was taken to the emergency room with breathing problems. (The trains News Wire rounded the letters, WHICH YOU CAN READ HERE.)

Last month, Lindsey wrote to the STB lamenting the number of misrouted cars on a manifest train he operated, the North Platte, Neb.-Hinkle, Ore. symbol MNPHK. This is a service issue that is not tracked weekly in the railroad’s performance metrics file with the board.

“When I made my last submission on the MNPHK, I re-shared it online and appealed to rail workers across the country to share their own letters with train listings documenting the operational failures,” says Lindsey. “So, yes, I hope others will join us.”

The railway workforce has the ear of the STB

Testimony from union officials, along with points raised in letters from railroad workers, shaped the STB’s order requiring Class I railroads to submit service restoration plans. The council asked the railways to explain acceleration and speed restrictions, their use of energy management systems like TripOptimizer and reductions in power-to-tonne ratios – all working points raised during the two days of hearings and in individual letters to counsel.

Oberman, in an interview with News Wire last week, said feedback from rail workers has helped the board better understand what’s happening on the rail network.

“As a general rule, I’ve always encouraged contributions from all sources,” Oberman says. “The more information we get – the more we learn about what’s going on – the better.”

The board welcomes additional comments from railroaders. “I’ve always been very nice at work,” Oberman says, dating back to 1975 when he began a 12-year stint as a city councilman on the Chicago City Council.

But Oberman cautioned against sharing information that could be considered proprietary.

“I urge people who want to communicate with us to be careful. Because when things are sent to us, we usually have an obligation to make them public,” Oberman says, noting that the board is also required to protect commercially sensitive information about the railroads and their customers. “They shouldn’t, and we shouldn’t, publicize things that are prohibited.”

Lindsey’s misdirected consignment note – which contained information about the train’s composition – violated this rule. The letter was posted on the council’s website, but was later removed from the filings directory while the STB assessed whether it should be public. The links to the document still worked, but eventually the letter was removed from public view entirely.

Still, the STB under Oberman aims to be a place where the railroad workforce can be heard. Longtime STB employees told Oberman from the April hearings that they did not recall the board having a forum where workers were invited to speak.

“It’s kind of shocking when you think about it,” Oberman says, noting the massive wave of job losses in the industry since 2017. “Particularly over the last six or seven years, labor has been at the heart of what’s wrong with the industry – and that’s since they started laying off those 45,000 people.

Oberman says it’s frustrating that the board has very little direct authority over work. “I said to the railroads… ‘Look, I don’t care how many people work for the railroads, as long as you have decent service. And then I almost always say, ‘I don’t think you can have an acceptable service with the number of people working there,’” he says.