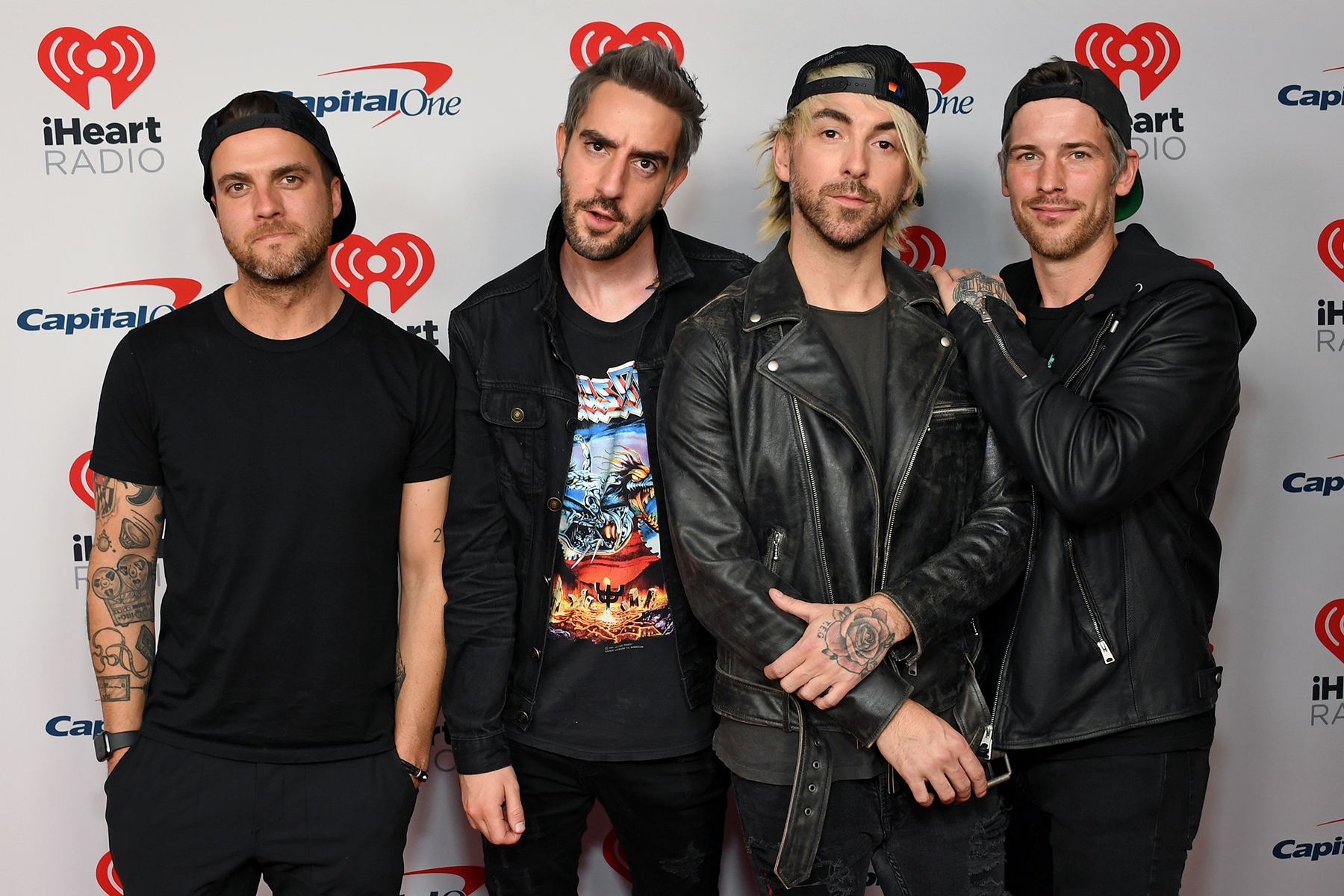 The four founding members of pop-punk band All Time Low filed a defamation lawsuit on Thursday against at least three people who claimed in recent social media posts that the band harassed or sexually assaulted teenage fans.

The bold move escalates the legal stakes for embattled emo rockers and will no doubt generate even more scrutiny after the Maryland-born foursome released an all-caps statement last October denying the allegations online.

The complaint, obtained by rolling stonesays the group has no idea who the online accusers are, leaving them “no choice but to mobilize and use the civil justice system to identify the culprits, prove the defamatory statements false and seek justice”.

“The purpose of the lawsuit is to establish the unambiguous truth and nullify these malicious lies so they are not repeated in the future,” says the nine-page complaint filed in Los Angeles County Superior Court. .

The band members – identified as lead guitarist Jack Barakat, vocalist/guitarist Alex Gaskarth, bassist Zack Merrick and drummer Rian Dawson – say they plan “to use the discovery, including subpoenas, to discover the identity of those who defamed them”.

“Unfortunately, this is the only avenue left to properly restore their reputation and repair the damage done to their business. [The band] will then donate any proceeds from this litigation to charities that support victims of sexual abuse,” the lawsuit states.

The allegations against the group went viral in October. The first accused, identified in the documents as Doe 1, is a TikTok user who posted a encrypted message as @mini.grew claiming that “a famous pop punk band” offered her beer on a tour bus and asked her for her bra “for their naughty collection” when she was 13. The woman did not explicitly name the group but “provided easy-to-solve clues” that led to a consensus the group was All Time Low, the lawsuit states.

According to the complaint, a Twitter user named @spidahkii quickly came forward to refute Doe 1’s allegations. She claimed to have attended the concert with Doe 1, shared a photo supposedly showing them at the event and said the Doe 1 claims “never happened”. The lawsuit claims Doe 1 later admitted to posting his statements “to be mean to a peer” and made his video private. Since then, she has been posting under a different name.

A few weeks later, a second accuser by the name of @ATLstatement released a lengthy statement on Twitter and TikTok alleging Barakat sexually assaulted her in 2011 when she was 15 and he was 22. She claimed the inappropriate relationship continued for years as she followed the group during subsequent tours.

The woman, called Doe 2 in the lawsuit, “maliciously” posted the “elaborate and completely fabricated story” knowing it was false, the group claims in the new filing. Doe 2’s Twitter account has since been suspended, although his statement remained live on TikTok on Thursday morning.

On October 24, another Twitter user with the handle @dietsodasage posted a tweet claiming to have counted 97 allegations against the group. “If 97 people isn’t enough, I don’t know what to tell you,” wrote the user, identified as Doe 3.

“Without any evidence, Doe 3 blatantly and falsely asserted that ’97 allegations’ had been made against the band, an accusation that has spread like wildfire across the internet,” the lawsuit alleges.

The Twitter account has since been deactivated, but the lawsuit includes a screenshot of a message attributed to @dietsodasage which reads: “I feel a little weird about how people took my tweet on the atl situation :/ I didn’t mean for things to go like this so I’ll probably go private for a few days.

In one statement published online On October 25, members of All Time Low called the anonymous allegations on TikTok and Twitter “absolutely and unequivocally false.”

“We are further investigating the source of these false accusations and will seek legal redress as we take these allegations very seriously. In this spirit, we would like to reiterate that we stand with victims and always wish to amplify the voices and stories of those who have suffered abuse and trauma. But we cannot and do not want to fuel or amplify lies that only blur and distort the true stories of those who need to be heard and represented,” they wrote.

The three posts and the band’s denial fueled a maelstrom of responses, questions and outraged counterattacks from fans. In a response, Twitter user Samantha Garcia shared a photo of herself with Barakat allegedly taken when she was 14 and he was 21. She claimed the guitarist “enthusiastically said ‘crazy!'” before signing his chest at her request.

“I don’t have any personal feelings about it, other than that the culture of the time shouldn’t have encouraged teenage girls to oversexualize themselves for ‘the stage’. I should never have felt comfortable enough asking a grown man to sign my boob, but that’s the way it is,” she wrote.

I personally have no feelings about it, except that the culture at the time shouldn’t have encouraged teenage girls to oversexualize themselves for “the stage”. I never should have felt comfortable enough to ask a grown man to sign my boob, but that’s the way it is. pic.twitter.com/1ZUH0uu3eD

Talk to rolling stone On Thursday, Garcia, now 26, said she was a huge fan who had attended more than 20 All Time Low shows over the past decade – including many where the band endorsed the launch of bras on the scene. “For a long time, their shows were pretty hot. And their fan base was quite young. I think that changed when they realized the culture was changing,” said Garcia, a native of New Brunswick, NJ.

“I would have appreciated a little more accountability,” she added of the band’s statement and defamation lawsuit. “I wish they had said, ‘We were young too. We weren’t aware of the damage we were doing to our young fans. It sucked. We’re sorry it wasn’t always a safe environment, but we’re trying to do better. Instead, they say, “We’ve always been good.” (A rep for the band had no immediate comment on Garcia’s comments Thursday.)

All Time Low’s new lawsuit is similar to a defamation suit Justin Bieber filed in June 2020 against “two social media users” identified only as Danielle and Kadi in his original filing.

The “Peaches” singer said Danielle “maliciously” lied when she claimed Bieber sexually assaulted her at a hotel in Austin, Texas on the very specific date of March 9, 2014. In her complaint, Bieber said he had proof he was staying at a rental property in Austin with then-girlfriend Selena Gomez that night. Bieber also accused Kadi of “provably” fabricating a story that he sexually assaulted her at the Langham Hotel in New York City at 2:30 a.m. on May 5, 2015. In his filing, Bieber said he was at a Met Gala after-party with dozens of witnesses at the time of the alleged attack and was pictured leaving the party around 4 a.m. and stopping for a snack at a hot dog stand. The case is due to go to trial in May.

A legal expert has described the types of defamation lawsuits Bieber and All Time Low have brought as “bold power plays.” “It’s not something anyone would get into lightly. I guarantee that they have been informed that by taking legal action they expose themselves to discovery which would include all the allegations that have been made online. By suing, it looks like they are coming in voluntarily, knowing there will be background inquiries, and they don’t care,” said attorney David M. Ring, who represents one accusers of Harvey Weinstein in his Los Angeles criminal case. , recount rolling stone. “Apparently they are not afraid.”

Without specifically referring to All Time Low, Ring added that libel suits can be a “double-edged” sword for plaintiffs with anything but spotless records.

“There’s a pandora’s box element to bringing a lawsuit like this,” he said. “If you’re doing this just to be a bully and shut people up, it could backfire. You could start a fire under other victims to retain the services of a lawyer. More women might start to come forward out of sheer anger, feeling compelled to do something.

For their part, the members of All Time Low remain adamant that October’s allegations are not only false but “diminish” the group’s touring, music publishing and sponsorship opportunities. They are seeking actual and punitive damages and an injunction ordering the Doe defendants to remove any defamatory posts.

“Not only was the reputation of the band and its members unjustly tarnished, but the band also lost business opportunities and suffered the cancellation of scheduled events,” the new lawsuit states.

“All Time Low has worked hard for two decades to gain its large fan base and would rather continue to focus on its music than advocate. However, these false and salacious accusations have harmed the band, its members and their families, as well as All Time Low’s business.

Defamation lawsuit from All Time Low