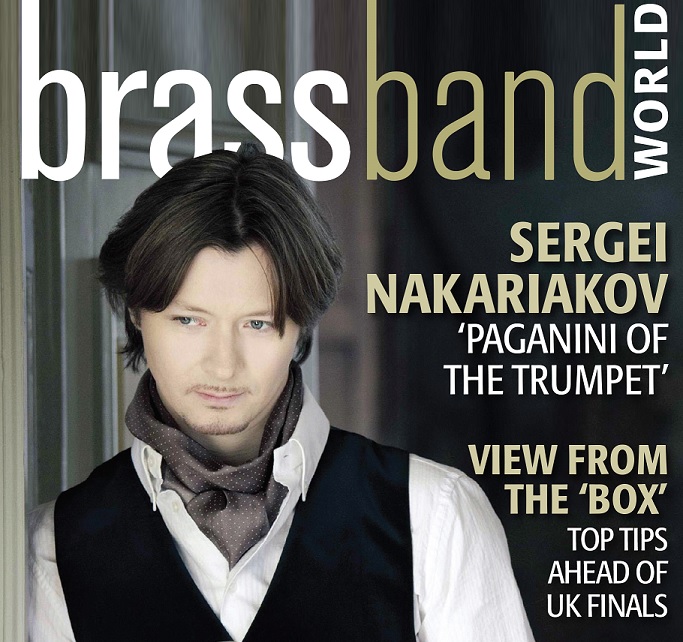 The latest edition of the leading magazine is now out – and once again it’s packed with essential reads, news, views and opinions.

THE PAGANINI OF THE TRUMPET

Established as one of the most sought-after trumpeters on the international scene, Sergei Nakariakov is blessed with a rare combination of breathtaking virtuosity and a smooth, velvety sound.

This month David Childs meets the Israeli-Russian musician and provides insight into his life, career and collaborations.

VIEW FROM THE BOX

Four of the 12 judges for the upcoming Section 1 – 4 UK National Finals – Alan Morrison, David Hirst, Alan Bourne and John Maines – provide helpful tips and advice for groups preparing for Edward Gregson’s Connotations, Lions of Legends by Thierry Deleruyelle, the Kaleidoscope by Philip Sparke and A portrait of Elgar by Dan Price.

Following last month’s article on Preserving and Celebrating Individual National Sounds and Traditions, Dr Nathan Miller, Assistant Professor of Musicology and Horn at Asbury University and Director of the Orchestra and chamber music, in Kentucky, United States, contextualizes the heritage of its country’s marching bands, arguing for distinct, but related, traditions.

In the midst of the release of the A4 Brass Quartet’s latest CD, ‘Mosaic’, David Childs catches up with his star players: Jonathan Bates, Jamie Smith, Mike Cavanagh and Chris Robertson.

This month’s Pro Platform features Dr. Liz Lane, the recently appointed Associate Songwriter of the Grimethorpe Colliery Band. Christopher Thomas speaks with the multi-faceted composer and educator, who carves her name in the annals of the innovative, transgender fanfare repertoire.

The Mbale Schools Band entered the psyche of traditional competitive groups when they participated in the youth section of the Foden 2021 Pentecostal Friday group competition. Philip Monk provides insight into his creation and development of the Ugandan group, which contains relevant lessons on how to become flute players from young beginner marching band players!

Cory’s Phill Harris spent over 40 years with the Rhondda-based Welsh band, but recently decided to hang up his cornet and retire from the band. Phill’s decade-long colleague Lisa Fitzgerald-Lombard met him to discuss his incredible and memorable career.

A TOUCH OF KLAAS

The remarkable 35-year musical partnership between Klaas van der Woude and Brass Band De Bazuin Oenkerk has come to an end. Gerard Klaucke, of CU Brass, pays tribute to the well-respected musical director who enjoyed one of the longest and most successful tenures as a conductor in the Dutch orchestra.

Helen Williams tells exemplary and heartwarming stories of the contributions that innovative and determined brass band organizations from New Zealand, England and Northern Ireland have made to the well-being of local communities, which in one case even impressed Her Majesty Queen Elizabeth II.

The 2021 New Zealand National Marching Band Championships became the first major competition in the world to successfully emerge from the global pandemic when its five-day event was held recently last month. Christopher Turner brings all the action of this most memorable brass festival.

Smith-Watkins trumpeter Mike Lovatt just made a sensational setting of Bizet’s Carmen from an iconic 1950s Billy May album as a virtual performance project from his new “Brass Pack” – Nicola Bland enjoys a Q&A with the star player about his creative lockdown success.

Placed 27th in the QS 2021 World University Rankings, making it the leading institution outside of London and Oxbridge, there are more reasons than ever to consider studying music and, in particular, performance band at the University of Huddersfield, whose online and on-campus open houses are scheduled for fall 2021 and January 2022.

As the new academic year approaches, BBW’s Pro-Practice host Dr Robert Childs invites Dr Stacie Mickens – professional musician and associate professor of horn at the University of North Texas College of Music – to share a valuable reminder on the label for students and musicians.

This month David Childs meets the Israeli-Russian musician and gives insight into his life, career and collaborationsBBW

The childhood dreams of instrument and mouthpiece designer / maker Antonio Rapacciulo came true when Sergei Nakariakov chose to become one of his artists, collaborating on a range of trumpets and mouthpieces for AR Resonance. the trumpeter has met his icon!