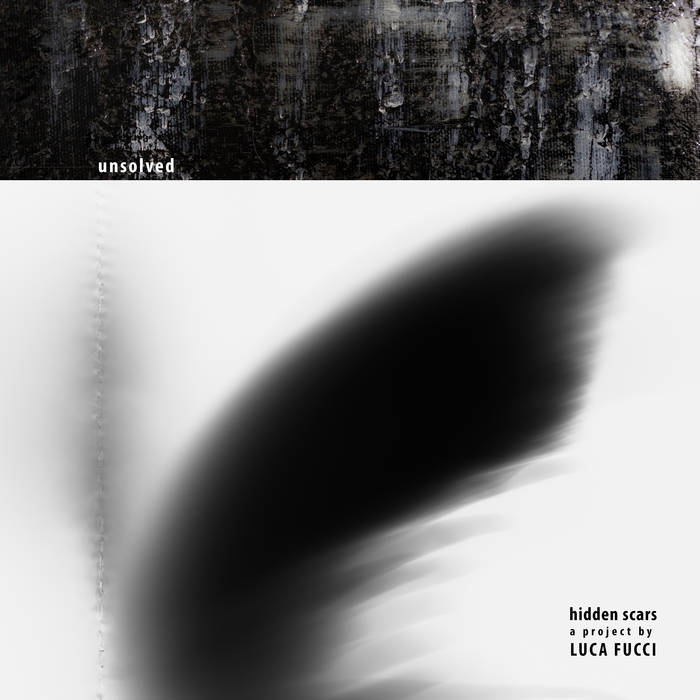 Background information: “Unsolved” is the third full album by Italian artist Luca Fucci, also known as Hidden Scars, which was also the title of his 2015 debut album.

Contents: This album is quite versatile, taking flight with pure Ambient/Cinematic music played on the piano. Quite gradually, the tracks evolve from evasive atmospheres to heavier cuts reinforced by industrial sound treatments and even acidic sequences. There is an alternation between slow and fast rhythms, the composition becoming more melodic and performed with bombastic arrangements.

+ + +: This album is an interesting production by its diversity and its eclecticism. I like the dreamy, evasive bits of part one, but I definitely prefer the more elaborate, darker, heavier cuts of part two. “Gateway” is a cool track for its industrialized sound and acid-like elements. And I also have to mention “Gazing Into The Abyss”, which is just a beautiful song.

– – –: I have nothing against diversity and different musical genres, but there is clearly a serious contrast between the first and second part of the work, the album being definitely divided into 2 different tracks.

Since you are here…
…we have a small favor to ask of you. More people are reading Side-Line Magazine than ever, but media advertising revenue is falling rapidly. And unlike many news agencies, we don’t have a paywall in place – we want to keep our journalism as open as possible. So you understand why we need your help. Side-Line’s freelance journalism takes a lot of time, money and hard work to produce. But we do it because we want to push the artists we love who are also fighting to survive. If everyone who reads our stories, who likes them, helps fund them, our future would be much safer. For as little as US$5, you can support Side-Line Magazine – and it only takes a minute. Thanks.
Donations are securely funded through Paypal.

Chris Lane Prepares For 2 Kids Under 2 With Lauren Bushnell, Album