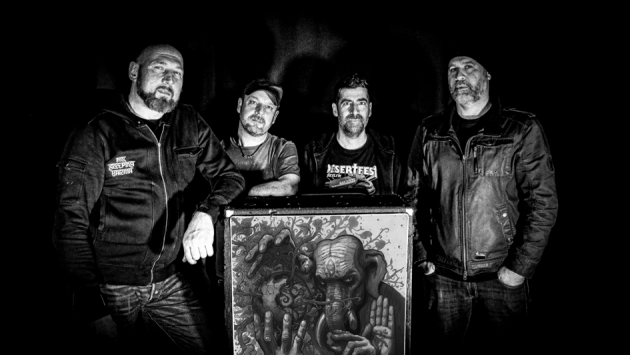 MY SLEEP KARMA have announced a new album!

The next album was produced, recorded and mixed by drummer Steffen Weigand to New Life Studiosand was mastered by Andreas Balaskas to Masterlab Studios in Berlin. The album cover was created by an incredibly talented artist Sebastian jerk.

The new album intends to describe the (absolute) self, the indestructible and eternal essence of the spirit, and is often translated as “the soul”. Illness, death and existential fear had brought the band to a point in music and life where they were on the verge of splitting up. Atma tells the story of their lives, dealing with the trauma of personal tragedies, the deepest pain and fear of four best friends who have gone through their darkest days since their band’s existence.

“We already started working on video content in 2018. The world is full of hate, envy, fear and greed and it seems like the competition never stops,” comments the group. “Society is increasingly lost in a jungle of dog-eating dogs, and at the time we never thought that in 2022 it would be even worse. Besides the latest pandemic or the Russian-Ukrainian war, many people face massive conflict on a daily basis. In the end, there is always hope that the world will become a better place once humanity understands. Love is the key and peace begins to follow. inside each. The video track Prema tells that story and the whole album is about that. Atma goes out with love to our dear families, friends and fans. Thank you for supporting us over the years and especially in the last dark times.

Atma is set for release on July 29 via Napalm Records. Pre-orders are available now and can be purchased here.