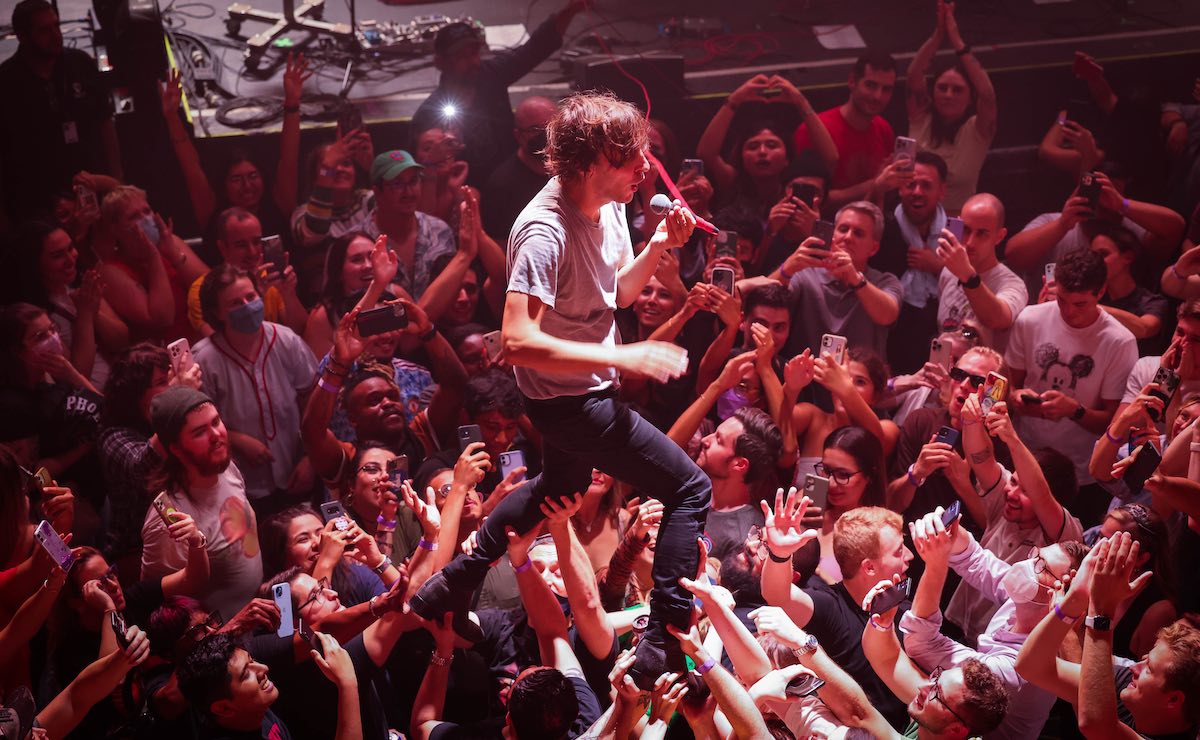 I’ve never… ever seen Phoenix in such an intimate setting in my 13 years covering them – and it was AMAZING!

I was first introduced to the live Phoenix experience in 2009 at the Monolith Festival in all of the historically awe-inspiring surroundings of the Red Rocks Aphitheatre. I was just getting acquainted with their music and this fall festival performance was a follow up to their grammy winning release, Wolfgang Amadeus Phoenix, performing on the biggest stage in the world. This first year of existence of this disc and the rise of Phoenix are magnificently documented by Francisco Soriano and Antoine Wagner in their documentary film, From a mess to the masses. Definitely worth checking out if you’re as big of a Phoenix fan as I’ve become over their career since. Well, that’s enough for now…

Familiar faces of the French quartet (Thomas Mars, Deck D’Arcy, Laurent Brancowitz, Christian Mazzalai) as well as touring members Robin Courdet and Thomas Hedlund were featured at the full house at the Riviera Theater with a baroque instrumental melody as the curtains rose and with a bright flash of light, Phoenix was back!

Thomas Mars blended into the scenery of the French countryside singing the first lines of crowd pleaser “Lisztomania”. It felt a lot like reconnecting with old friends we hadn’t seen in years. And just like that, Mars’ excitement and energy to be back on stage was evident. Almost crawling into the audience himself in the first three songs of the band’s nearly two-hour set, Mars embodied his own French serenade fans who had eagerly held on to their front row seats.

Very similarly to the Orsay Museum or Le Louvre, the 21-song set was mostly made up of favorites and hits spanning the band’s album catalog. As a fan of their entire discography and an artist myself, I felt like a child left to fend for myself in a running art museum and basking in the grandeur of these meticulously crafted works of art for my ears. I couldn’t help but appreciate the childlike innocence conveyed at times on Mars’ face as he observed his surroundings and truly fed off the energy of the audience, who danced along with every song without missing a beat. .

The set was beautifully interrupted with an intermission-like break leaving d’Arcy and touring keyboardist Coudert to serenade us with “Love like a Sunrise” in its entirety, paired with those gorgeous visuals projecting tunes satellites from Chicago and taking you to the interstellar realms of space before returning to earth and microscopically diving into the cell of the human hand. Very beautiful !

This is just one example of the perfect organization of lights and visuals that framed the band throughout their set and immersed me in this romantic world that I tend to visit when I personally get lost in Phoenix music. The first two new singles (“Alpha Zulu” and “Tonight”) were sneakily inserted into both halves of the evening’s show. The second single “Tonight” had been freshly presented to the world a few hours before, with the announcement of their next album Alpha Zulu. The track itself features Ezra Koenig from Vampire Weekend and the album is due November 4.

Making a post-pandemic comeback to both the music scene and performing in front of live audiences, the setlist was a perfect collection of songs for the band to reacclimatize in our hearts and for fans to sing along to their favorite lyrics. The set included “Funky Squaredance”, which I found really interesting because during part of it, a mysteriously masked character came on stage and Mars got down on his knees singing to him in what was apparently a homage to something. Closing the main program with my favorite, “Rome”, bringing the house down as everyone sang along with the chorus “Rome, Rome, Rome, Rome”.

The evening ended on a tender note with Mars and d’Arcy back on stage for the decomposed baroque version of “Fiore di Latte” on a large blue harpsichord. He serenaded us from above. Afterwards, the rest of the band returned to the stage for “Trying to be Cool” where Mars sang while looking into the crowd with projection binoculars which displayed who was looking in the crowd on the screen behind him. A fun gadget that would have made the great French director François Truffaut proud. Bringing the crowd back to their high note, our last song of the night was “1901” which left me lounging in giddy and Mars individually thanking the crowd and waving goodbye until next time before returning to the stage. for a final greeting.

See photos from the Chicago show, by Josh Dar.