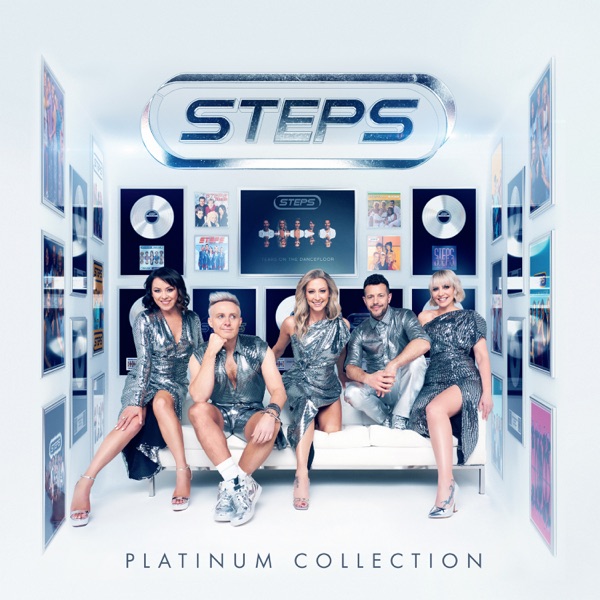 Steps celebrate their legacy as Britain’s premier pop group by showcasing 25 years of hits with their “Platinum Collection”.

Coinciding with the anniversary marking the band’s line dancing debut 5,6,7,8the album is 21 tracks long and commemorates a defining moment that even the band themselves didn’t see coming.

Opening with the group’s comeback hit in 2017 Fear of the darkthe tracklist covers Steps’ full repertoire — minus the festive 2012 “Light Up The World” collection — and offers the most comprehensive collection of their work to date.

Featured, 11 UK Top 5 hits, including No. 1 singles The tragedy, Heartbeat and stomp – as well as Steps’ most popular recordings of recent years, such as What the future holds, neon blue, something in your eyesand Heartbreak in this City (feat. Michelle Visage).

Additionally, the album features two new recordings that showcase different sides of the band, who have become masters of cover art over the past two decades. This time they’re going after VINCINT Hard 2 Forget for a contemporary dance pop sound, before tapping into the disco revival with one of the movement’s originals – Three Degrees’ The runner – for a sparkling slice of pop nostalgia.

Both are worthy additions to the band’s catalog, complementing new and classic hits, while for those who can’t get enough of Steps’ pop gold, the extended ‘Platinum Collection’ editions come with a second disc of additional singles, album tracks, remixes and rarities – many of which are previously unreleased.

Alongside the singles that didn’t make it the first time around, there are also album tracks (lost paradise, Happy), B-sides (Like the first time) and four new remixes, including the Flashmob edit of Deeper shade of blue and Steps 25 Revisited versions of One for sorrow, stomp and The tragedy.

It’s an added bonus for fans, along with individual member CDs that each include three other tracks, which were personally selected by Claire Richards, Ian ‘H’ Watkins, Faye Tozer, Lee Latchford-Evans and Lisa Scott- Lee.

This once again demonstrates the band’s commitment not only to their music, but also to their fan base, which remains as loyal today as it was two decades ago. While it would have been easy for the band to whip up alternative, signed covers to boost their sales, the personal curation of individual editions by ‘Platinum Collection’ members is symbolic of the attitude and ethos that resulted in Steps’ continued popularity after all that. time.

The selections are varied and, while highlighting some of each member’s favorite cuts, also showcase their songwriting abilities, with Claire (hand on your heart), Lisa (never forget you), Fay (If you believe), H (learn to love again) and Lee (Revolve around) each selecting a co-write for their personal version of the album.

After a two-year campaign that saw the band release back-to-back albums at the height of a global pandemic and embark on a full-scale arena tour across the UK, their current celebration completes one of most exciting and prolific eras in Steps history.

The complete “Platinum Collection” is a testament to the band’s history, showcasing their hard work and commitment which, 25 years after their debut, continues their legacy as one of the most successful pop bands in the world. chart history.

Long may their reign last!