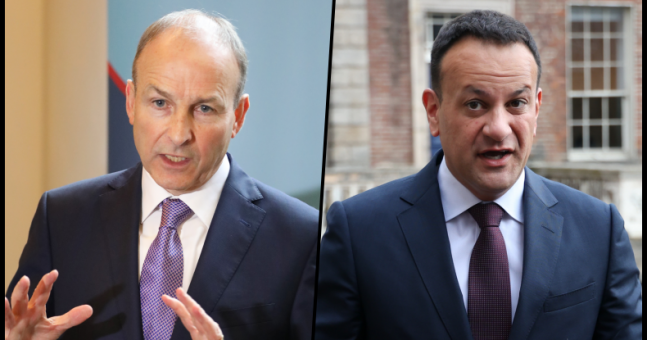 “Due process must be followed here.”

Micheál Martin declined to comment on Gardaí sending a file to the office of the Director of Public Prosecutions (DPP) on their investigation into Tánaiste Leo Varadkar sending a report to GP Maitiú Ó Tuathail in 2019.

The Taoiseach spoke about the ongoing investigation on Sunday April 24.

“I’ve been consistent on this point from the start, that due process is important to every individual in the country, whether you’re a politician or not,” Martin said.

“Due process must be followed here, and the presumption of innocence in respect of any complaint filed with the Gardaí for prosecution and then with the DPP.

“As far as I am concerned, it is with the DPP now and it is inappropriate to comment given the independence of the DPP.”

On gardaí submitting a file to the DPP as part of the investigation into the disclosure of a confidential government document to a friend of Tánaiste Leo Varadkar in 2019, Taoiseach @MichealMartinTD says “as far as I’m concerned it’s with the DPP now and it’s inappropriate to comment” pic.twitter.com/6P0BFIp6tH

A Village Magazine article alleged that Varadkar, then Taoiseach, passed on a confidential agreement with the Irish Medical Organization to Ó Tuathail, who was head of the National Association of General Practitioners.

A Garda spokesperson told JOE on Saturday April 23 that the investigation file had been forwarded to the DPP for review.

“An Garda Síochána can confirm that an investigation file on this matter has been submitted to the Office of the Director of Public Prosecutions for review,” the spokesperson said.

“As this case is now under review by the Office of the DPP, An Garda Síochána will not comment further.”

While the Tánaiste apologized for his actions – including in the Dáil which voted confidence in him – he repeatedly stated that he had committed no offence.

“No impartial person will question my motivation or my integrity,” Varadkar said in the Dáil last year.

“It was a mistake, and I take full responsibility for it.

“I regret it, I’m sorry for the controversy that has been caused.”

Pusha-T Explains What Happened With His Madlib Produced Album